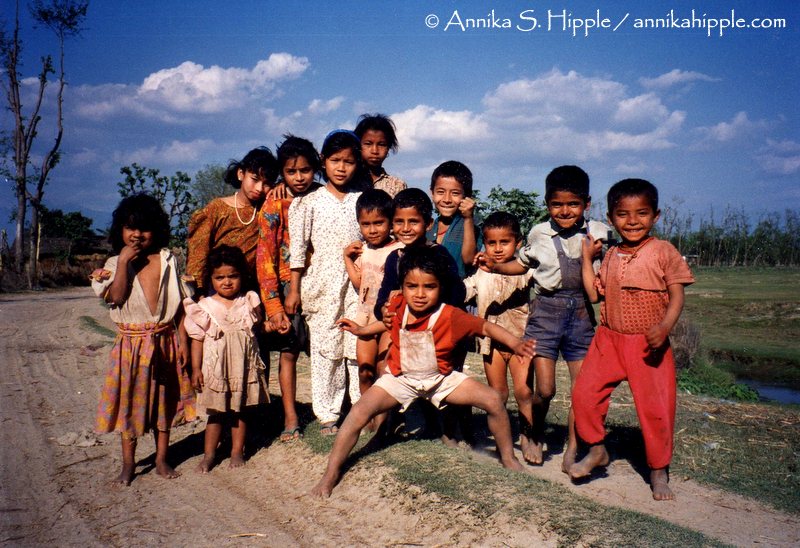 Here’s one from my film archives: A group shot of children in the village of Sauraha, in the lowland region of Nepal known as the Terai. Sauraha is the gateway to Chitwan National Park, which is home to the rare – and elusive – Bengal tiger (which I didn’t see), as well as rhinos (which I did) and a host of other wildlife.

At the time of my visit, in March 1995, Sauraha was a sleepy little place with just a few guesthouses and tour operators. Western travelers were still an exciting enough sight that I quickly attracted the attention of local children as I wandered through the village. I felt like the Pied Piper as the children joined me on my walk, their numbers growing as we made our way through the village. Instead of a flute, I had my camera – the real draw for the kids, who begged me to take their picture over and over again as they posed in different spots. I obliged, until finally I had to say “enough” in order to save film for the adventures to come.

It’s been 19 years since that trip, and these children must be all grown up by now. Sauraha has apparently developed into a full-fledged tourist town with an array of hotels, restaurant, Internet cafés, and gift shops. I doubt I’d recognize it. And I have a feeling the sight of a traveler with a camera would not cause the same stir now as it did back then. I’m glad to have the memory.